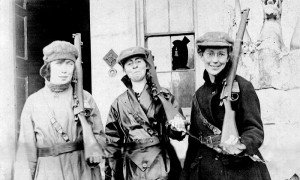 I am disinclined to believe that the firearms in the picture here are examples of the ones captured in action just as I doubt that the spectacle that two of the ladies’ pictured are wearing were sold by Yeates & Sons on Grafton St. at the period in question. There’s also something about the girls’ expressions – though here I enter into really perilous water since the question of how people “wear” their faces in any period is treacherous both as to substance and the effect it has on the auditors. I say that a jolly smirk of the kind more or less shared by all three participants is an inherently modern expressive attitude and that the condition of being “young ladies” would have militated against several of the ingredient of their demeanour in 1916. The caps, too, seem to be retro-revolutionary as owing more to “Dr Zhivago” than to “Amhrain na bFianna”. Viewed in this perspective, the picture is part of the commemoration rather than the thing commemorated. All of which leads me to think that the band-wagon is never so full that more cannot jump aboard and regale us with their brightest smiles in the process.

I am faintly hoping that someone will tell me that this unseen image is an authentic picture so I can launch a new discourse on the link-up between feminist and Irish independence in the historical period in question. It is a known fact that John Redmond alienated a whole generation of progressive women by his explicit resistance to Women’s Suffrage – for the peculiar reason that he feared the result of a redrawing of constituency boundaries that would come with it, as well as for reasons of prejudice and temperament. My own biographical experience in Ireland during the mid-century strongly suggest that to be an Irish women in the decades after 1916 came with a pretty cast-iron probability that one would not experience anything resembling a revolutionary life of any colour – though there are obvious exceptions, notably the Irish woman who shot Mussolini. But now that everything is being replayed in the Cloud, what joy! We can all die for Ireland and live on to fight another day! Now where is that old Mauser of mine?

Let’s look at the actual page .You see the caption and the by-line attached to the photo? “Drawn by the ideals of 1916, many women signed up to the republican cause. Photograph: Delia McDevitt”. If that doesn’t imply a contemporary picture, I don’t know what. Yet how likely was it that Delia McD was actually hefting a 10 x 8 plate camera around the war-torn streets of Dublin in 1916? Even if so, she was probably not the inventor of the fast film needed to take such a lively snapshot – though I heartily congratulate her on casting the girl on the left who looks just like a member of Maud Gonne’s extended family and actively resembles a daughter of Iseult with Francis Stuart – so much so that I am tempted to think she is a grand-daughter of Iseult. She is certainly the only one who knows what expression might be worn on such a historic occasion. You have to love the Sam Browne belts – which probably imply very special access to the national hoard of revolutionary kit – but do I discern a plastic mack on the lady in the middle? However good Olivia O’Leary’s take on Irish feminism in the Irish Republic may be – and I underestimated it at first glance – this is a fake mis-en-scène and, a such, further evidence of the decline of Guardian standards in the face of competition from the social media. I more and more repent my recent supine response to their egregious customer survey.

The Guardian article address is – http://www.theguardian.com/commentisfree/2016/mar/25/100-years-after-easter-rising-irish-women-still-fighting-gender-equality.