I admire the article for its clarity and force in dealing with a turbulent question. There is no doubt that Mehdi abhors the killings as much as anyone. He also demonstrates the danger today for democratic people – us, that is – arising from an uncritical identification with the content and policy of Charlie Hebdo and using it as a mascot for our idea of freedom. It cannot serve in this role because of its flagrantly offensive contents. We may be free, but we are not all hell-bent on devising the most insulting messages for our other-culture co-nationals.

It is important to recognise that images of the Muslim Prophet are offensive per se in Islam (as are those of God). This is a culture difference which fair-minded people must take into account. The government-sponsored cartoon of Mohamed on the cover of the next issue is therefore a calculated insult in itself, irrespective of content. We are certainly free to insult (though not to libel without penalty), but we are not quite free to pretend that we are not doing so and to capitalise on the deaths of the victims of a heinous terrorist attack to pretend that we are unblemished by any prejudice or violence ourselves. 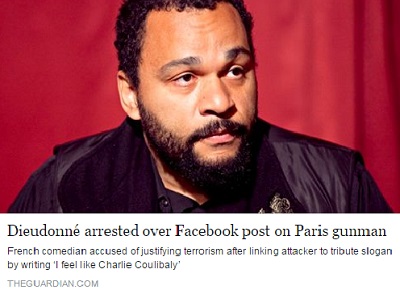 Everything we might normally love and respect is being turned to shit by cynical politicians who represent themselves publicly as its protectors. In practice all they can do is illustrate the fact that their freedom of expression is freedom for themselves and not for those with a different angle on events. Dieudonné seems to think there are two sides to the question – without even hinting that he is a supporter of violence in the process. For that he gets locked up in a police station. In this matter I am on the side of Dieudonné. How else to express support for freedom of expression?

I am hoping to say goodbye to the Charlie topic but I can’t leave without saying I appreciate the good faith of anyone who professed to be Charlie in the sense of the banner “Je suis Charlie” in response to the atrocity in question. I think from the outset we all knew that this was an echo of JFK’s moving assertion, “Ich bin ein Berliner” which has of course been the butt of affectionate ridicule – but mostly applause as bringing Cold War politics down to the plane of personal identification.

My own demur about saying “I am Charlie” has to do with some insight into the actual contents of the magazine, a little understanding of Islamic culture in respect of pictorial representations, sympathy with Arabs in France and elsewhere, and a deeply seeded knowledge of what was to be Irish in other times – even though I have been personally lucky in being exempted from the worst of that body of ethnic prejudice. All of this leaves me with an alternative version of the “Je suis Charlie” slogan – which is going to be my parting shot. What I say is this with  fashionably interrogative tone: “Am I Charlie?”

It is for my friends and acquaintance to tell me if I have been relentlessly witty at the expense of others and often done the dirt on people or groups of people in more difficult situations than my own. I would like to be the Charlie who upbraids the insolence of power, but not the Charlie who lays a whip upon the back of oppressed people. I expressly refuse to preference one Semitic religion over another – meaning Christian, Jew or Muslim.

Nor will I avail of the hollow conceit of the French-style secularists who think their ‘patrimoine’ includes a personal line through to Diderot and Voltaire. In the end it is all about face to face. What can I say to my neighbour to make him or her feel that I genuinely desire their well-being, respect their rights, and oppose any unjust attempts to diminish their legitimate self-esteem? If Charlie Hebdo does all that, call me Charles Stanley George Stewart from this day forth. Otherwise, adieu Charlie Hebdo – Requeiscat in Pace, but requiescat most of all.