I have been mulling over a wry reaction to some of more excitable reactions met with on Facebook when I posted my demur about the wisdom of Charlie Hebdo‘s graphic satire on Islamic fundamentalism – no bad thing in itself, at least as regard fundamentalism anywhere, i.e., the intransigent insistence on literal and joyless truth of so-called Revelation. “Nothing is sacred”, says from my friend Bernard Griffin, a factual observation with to which I entirely assent. 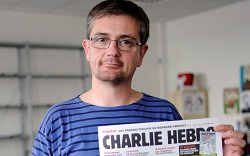 Indeed, nothing is sacred – since sacredness is a redundant category from the modern standpoint, and any other standpoint insofar as materialism and inductive science has shattered the pretensions of every former metaphysical system of belief or method of inquiry.  (The two are, of course, synonymous in a modern world outlook.)  For clarity’s sake, I want to say that when I referred to the opproprium which the Bible lavishes on “mockers” – read ‘satirists’ in this instance – I was in no vindicating the attack on the cartoonists.

Instead, I meant to point out that the malevolent promise that all such “mockers” of religion will “reap the whirlwind” is an example of a scriptural trope which regularly recurs in the sacred texts of Semitic religions of which both Islam and Christianity, along with Judaism, are the prime examples.  And that their persistence in the Middle East and in mid-West America might suggest that some risk attaches to mocking them in contexts which the illiterate can “read” without any likelihood of attaching a liberal exegesis. In other words, I was attempting to provide a calculus for the danger involved in satirising those fanatics, not a justification of their thoughts or actions.

I see that the attackers are now being described as “criminally insane” by members of the public (at least on internet). This corresponds exactly to what a former Al Qaeda insider told us last night on BBC Radio 4 when he said that ISIS provides the perfect means of bringing out the “inner psychopath” in its followers. He also spoke about its remorseless application of Sharia law, its penchant for judicial brutality, its ultimately genocidal aims and its faith in millennial prophecy. I now expect the French security officials to discover that the attackers were a contingent of ISIS, not independent agents in the same sense as Adebowale was in the Rigby killing at Woolwich of May 2013. 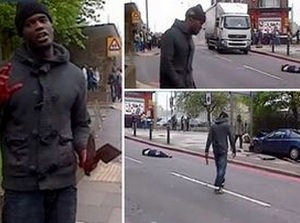 None of this diminishes the merit of any satire on “intégristes” (fundamentalists) but it does alter the risk in ways that the satirists and the French authorities apparently overlooked. The wider problem remains how to relate to France’s 5% Muslim population – most of whom are good citizens of the Republic. It happens that the French Republic has no legal mechanism for acknowledging Muslim Frenchmen and women as any different than others.

Historically, the people of Algeria were citizens of Greater France, an appalling travesty of the ideals of the French Revolution which horribly back-fired. To some extent it is still back-firing and France traditionally maintains order in its Algerian “bidon-ville” by a virtually paramilitary policing precisely because it has a limited capacity to interact with distinct ethnic groups as such on its own territory. There are, for instance, no Muslim High Schools there – as there are in Greater Manchester.

Laudably enough, Charlie Hebdo was operating from the high ground of French national culture which makes suppositions about the rational nature of the political community from which the butts of its satire are seen to defect – and from whose polite norms the cartoonists incidentally take comic licence to defect in a different direction according to their own zany and quintessentially adolescent way. But if the supposition that Society is rational evaporates – that is, the assumed that it is governed by a “Social Contract” in Rousseau’s classic formulation – then satire only retains its point only for the satirists and their own supporters. And when the supporters run scared or otherwise turn about, there is nothing left: no audience with a shared understanding of what is funny and permissable.

What happens to satire under political pressure is illustrative of its structural nature considered as a literary genre. Up to a certain point, it thrives on opposition: indeed, it can be seen variously as galvanising and embodying opposition to wrong-mindedness at the centre. But when the level of pressure grows too great, satire not only disappears but begins to seem the wrong reaction because the treatment of the oppressive agency as a Satire did not fare very well in Fascist German though it had a field day across the channel (“Hitler had something similar / But Goebbels had no balls at all.”) 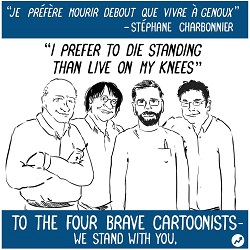 “We Stand With You” – Tribute to Charlie Hebdo cartoonists.

The practical question is, whether CH was operating within striking distance of the humourless people it was satirising and, if so, what revenge could they wreak? The courage of Stéphane Charbonnier (“Charb”) was extraordinary but it is not certain that his project was any different from a prankster who decides to put psychodelic drugs in the public water system. Great idea at the time but difficult to tidy up. Or perhaps we prefer to think of him as the torch-bearer for democratic freedom.

Many of the nice churches communities who are posting “Je suis Charlie” on their billboards – oddly like “Jesus Charlie”, but never mind that – might be up in arms (as the expression goes) if they saw Jesus sodomising God the Father and taking it up the bum from the Holy Ghost (sorry, “Spirit”). You have to laugh of course, but why did CH think that depicting the Muslim prophet with a bare arse was a good idea in the first place? Yes, I know – Freedom of the Press. That answers the question of the moment but it doesn’t answer the question of two cultures drawn from traditionally antagonistic religions sharing both the territory and the social realities of a modern European country. 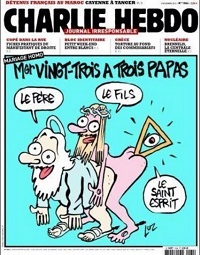 Now, if a Muslim cartoonist had given us Coco’s witty image (“Mahomet: Une étoile est née”) the whole feeling would be different and – though we would mourn his nigh-inevitable fate at the hands of co-religionists – we would be unlikely to demonstrate in defence of the three abstractions which make up the legend of the French Republic: Liberté, égalité, fraternité – another “trinity”, as it happens.

In other respects, the Charlie Hebdo demonstration is mired in ill-judgement especially in so far as the most offensive cartoon was authored by the artist “Coco” who voluntarily opened the front door of the journal’s offices – albeit at gunpoint – and survived the carnage in the room upstairs where the others of her ilk were murdered, a tragic detail that puts her in an appalling situation. Will she address the crowd in Paris?

I emphatically agree with the tendency of the discussion on Channel 4 News in which Will Self spoke about the bizarre equation between human rights and the “situationist” humour of Charlie Hebdo which has lead to its being co-opted at this point by the French state. He goes on in more inflammatory terms:

“”The notion suggests that freedom of speech is some kind of absolute right, and that’s exactly the same as a religious point of view.” 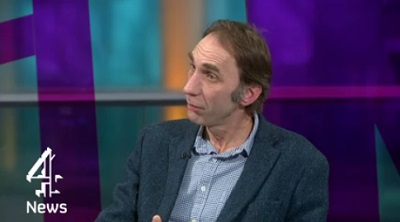 This – and other remarks of his – happens to rhyme perfectly with what I have said about the French deluding themselves into thinking they are the standard bearer for democracy and rationalism in the modern world, but also about their failure to account for religious difference and ethnicity within their own state. I could add that the actually-existing French Republic is a bourgeois oligarchy, first and foremost, and the most unaccommodating exponent of structural racism in the West. But their real failure is to learn how to live with migration – itself a logical consequence of former empire combined with the present-day tensions of global politics and the demographics of a modern European state.

The Charlie Hebdo deaths are tragic and obscene but to march for Freedom of the Press in these circumstances is to render the real freedom involved vacuous and possibly imperilled since many of the “freedoms” exercised by CH in their lewdly chucklesome French way would be outlawed as offences against race relations and/or public decency in England or America. I happen to enjoy non-conformity, dissidence and all that sort of thing – but not heartless attacks on the self-esteem of minorities who are trying to find their orientation in Western countries whose hostility to them is rarely further removed than one layer of epidermis or one muezzin or one burkha.

Give us the data for Algerian livelihoods in contemporary France – that is the freedom of information I want to hear. In the meantime, let’s be aware of what we are “defending” when we say we are defending Press Freedom and stop this self-congratulatory weep-in on the part of Western Powers whose record as ‘humanists’ or exponents of Press Freedom (especially in the rancid American instance) is deeply besmirched by colonial history and contemporary interventions in the Middle East. Thanks to Adam Wyeth for the link.

It is disquietening  to learn that “liberal” France has been banning pro-Palestinian demonstrations under its public-order mandate for a year past as possible occasions of anti-Semitic riots. More recently, we hear that the African-French comedian Dieudonné M’Bala has been banned from public performances likewise because of his authorship of the contemptuous “quenelle” – a gesture which basically means “up yours”, but has acquired anti-Zionist associations for reasons to do with … well, Palestine.

So what? It cannot be criminal to disagree with the colonisation of Palestine or the militant eviction of Palestinian residents of Jerusalem or the ghettoisation of Palestinians on the Mediterranean littoral in Gaza. Nor was it funny to see Merkel, Cameron and Netanyahu on kissing terms at the “Je suis Charlie” march in Paris yesterday – a photo-opp which frankly empties the popular demonstration in support of democratic culture of virtually all its meaning.

I say ‘virtually’ because these are all nominal democracies though they might as well be called management committees for the fiscal interests of Western countries and their allies. Perhaps King Abdullah of Saudi Arabia could be persuaded to join in considering that he is such a friend of the Western bloc – or was he too busy watching Friday’s flog-fest or a video compilation of last year’s best beheadings in “Chop Square” in Riyadh – the capital of an oil-rich ally where “liberalism” is legally equated with “terrorism” and punished accordingly. And to cap it all, Charlie Hebdo is so impartial in its satirical raids on religious believers of all kinds  that an anti-Palestinian campaign persisted in its columns right through the Intifada. And when one of the cartoonist began to lampoon the Israeli government, he was fired for suspected anti-Semitism.

So what “chuckles”, I ask myself, was the editorial committee actually debating when their planning meeting was tragically cut short last week – and how will the intended articles resemble the contents of the government subvented-issue of 1 million copies to be circulated this week coming for the delectation of all the newly-recruited Charlies world-wide? I can’t wait to see.