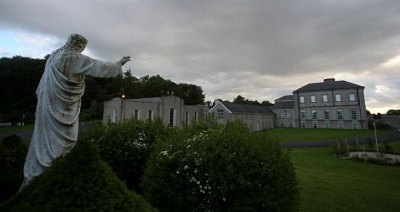 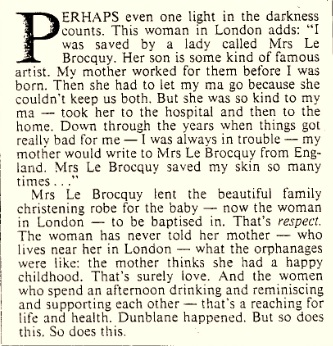 Obviously everyone is appalled by the story of 800 babies “buried” in a cistern connected to the Bon Socours home for unmarried mothers in Galway revealed in the recent news reports – in the Irish Times and and elsewhere.

I’ll spare you any guff as regards the aspiration so commendably expressed in the 1916 Proclamation – to “cherish the children of the nation equally” – but I’d like my family and friends to know, or perhaps simply recall, that Nuala O’Faolain once related in The Irish Times how our randmother Sybil personally intervened to help a mother and child caught up in the system and supplied a family gown for the christening and some funds regularly after. Do bear in mind that we have all used that very christening gown at our own “coming-out” moments at one denominational font or another down the the latest generation.

Here’s an extract from the relevant column, dated March 1996. I should put it on record here that I have to thank my mother’s album  to thank for this – a scrapbook which I scanned a few years back, along with her family albums. And no one was more surprised than she when this account of her own mother’s undisclosed kindness was made known by Nuala – herself a great battler against institutional shame in Ireland.
END_OF_DOCUMENT_TOKEN_TO_BE_REPLACED