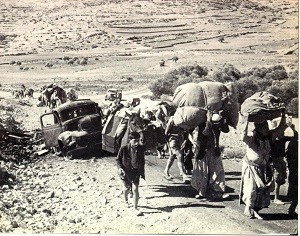 I was talking off-line – well, on FB messages – with a Jewish Irish-studies colleague and friend who fears that the identification of Zionism with Jewishness is becoming all too commonplace in talk about the Israel state today – not least on my Facebook page. I infer that he holds that state to be culpable of many excesses and that much of its purported “reaction to Hamas” is indefensible – if so, a credible position on his part, and I expect a personal burden too. One would wish it were not necessary to castigate the country with which one’s ethnicity and traditions are so often associated – though what the world knows as “Jewish” is often “British” or “American” and (albeit it in lesser numbers for horrific reasons) continental European as well. There is room here for the hyphenated forms “Jewish-American” and so on. All of this is a stimulus to further thought, and here it is for what it is worth.

Irish-studies folks are generally “on board” for a post-colonial interpretation of their subject area, Ireland – the country in which it is obviously grounded – but also any other country world-wide which has, or is currently, experiencing the woes of colonial invasion and imperialist subordination, or simply hegemonic repression in the sense of untrammeled cultural influence – all of which are variations on the theme of “colonialism” as this is understood in academic and wider walks of life today. In this view, the act of invasion and dispossession is a primordial crime which kick-starts major forms of social and political psychosis, if – more happily – with many interesting and appreciable cultural results. Well and good.

END_OF_DOCUMENT_TOKEN_TO_BE_REPLACED 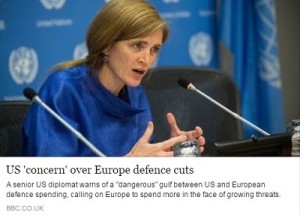 A little earlier this month she addressed the EU Parliament and asked European governments to spend more on defense to match the American investment, warning that the number of missions world-wide that call for a military response is growing not diminishing. Meanwhile Britain’s defense spending is set to fall again – though not as low as other European members who have failed to reach their 2% undertaking. All of this re-opens the debate about Western intervention in troubled regions of the world – a subject on which there is more dissension, if possible, than on austerity at home. END_OF_DOCUMENT_TOKEN_TO_BE_REPLACED 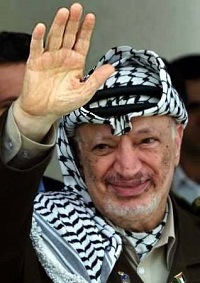 The communicative import of such clothing on our televisions screens is complex but the general message it transmits above all is to tell us that they are not part of the ‘fashion’ world we all inhabit and hence, in a very real sense, a different lot of people from us. This much seems certain – we can’t sell dresses, skirts, or tank-tops to them – though the irony is worth savouring that the keffiyeh worn by so many men, including Yassir Arafat, is very predominantly manufactured in Birmingham where, in fact, it was designed. END_OF_DOCUMENT_TOKEN_TO_BE_REPLACED 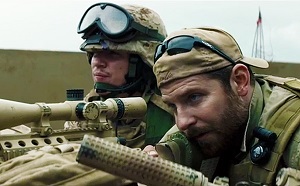 I saw Clint Eastwood’s “American Sniper” last night – already biggest grossing film since God knows when. It’s certainly a good film in the cinematic sense but it’s also about more sensitive cowboys in battle, hurt lockers and ‘evil savages’ on the ‘insurgents’ side. Yes, they’re still calling them insurgents. Insurging against what? The new world order? And what will be call the troublesome little men who rose up in the 1916 Rising when those commemorations come around? My point, in case I have lost the thread, is that Irish people generally think insurgency against empires is a good thing. Not this time, apparently. END_OF_DOCUMENT_TOKEN_TO_BE_REPLACED 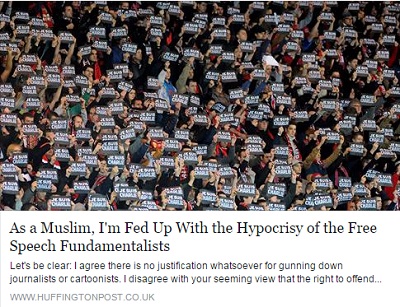 I admire the article for its clarity and force in dealing with a turbulent question. There is no doubt that Mehdi abhors the killings as much as anyone. He also demonstrates the danger today for democratic people – us, that is – arising from an uncritical identification with the content and policy of Charlie Hebdo and using it as a mascot for our idea of freedom. It cannot serve in this role because of its flagrantly offensive contents. We may be free, but we are not all hell-bent on devising the most insulting messages for our other-culture co-nationals. END_OF_DOCUMENT_TOKEN_TO_BE_REPLACED

There has been a lot of talk recently – and quite rightly so – about toleration for Islam, almost as if it were  a defective form of religion that needed indulgence or correction as distinct from a world religion with approximately two thirds of the population on the planet who are know to believe in a Divine Creator. (That Europeans generally do not can be taken for granted at this stage.) I am not qualified to defend Islam nor condemn it, but I am sure that the patterns of behaviour which are causing so much alarm – whether the imposition of the Sharia in more extreme Islamic countries or jihad-style attacks in others – are essentially uncharacteristic of the religion which has sustained the spiritual hopes of millions for half of modern history, and only 400 years shorter than Christianity, on which it is partly based.

I have lived in Arab countries and have found the people kindly and open-hearted with obvious and understandable limitations. By way of anecdote, I want to recall the occasion in Tripoli when a student who had promised to meet me at the airport fulfilled his undertaking without initially telling me that a young child in his family had died in the interim. His mother and other women in the family dutifully passed food through a veil from the kitchen and briefly his sister appeared as an ambassador. Only when I asked how many children there were was their recent loss made known. END_OF_DOCUMENT_TOKEN_TO_BE_REPLACED 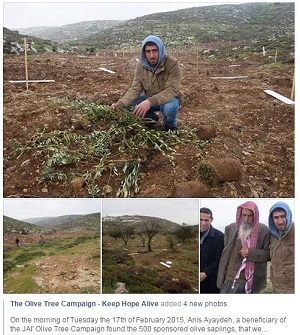 A novelist friend of mine has recently written on her Facebook page about the repeated destruction of olive groves by Israeli settlers in Palestine – with heart-rending photos of the long-suffering victims and their ruined crops. In another context it might be treated as vandalism. In the colonised regions of Palestine in can only have one meaning: an attempt to drive out the farming population – whose olive trees have been funded, on this occasion, by international supporters determined to ensure that they are not starved out of their own traditional land. groves As always, I wrote back immediately to say that no state should tolerate such malicious, criminal, and racist attacks – but of course they are tolerated, even encouraged – especially where the Israeli extremists are on a mission to extend the national territory and drive out the rightful inhabitants. END_OF_DOCUMENT_TOKEN_TO_BE_REPLACED 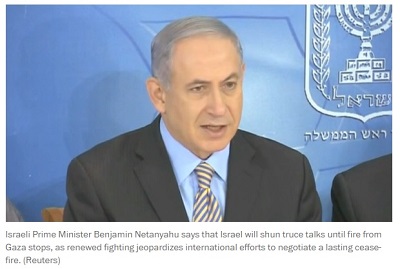 Nothing alters the fact that the international community has allowed Israel to use massive force against a civilian population but there is a reason why heads of state have been repeatedly confirm Israel’s right to ‘defend itself’ against Hamas missiles – in principle at least. Once the point is granted ‘in principle’, then the difficulty is where to draw the line.

The reality is that Israel withdrew from Gaza leaving a substantial infrastructure and that Hamas-Palestine has uprooted it and created no alternative. This is a ‘proof’ of Netanyahu’s prophecy that Hamas would not use its electoral mandate to ‘govern’ Gaza but only to wage war on Israel. And this is exactly what they will do as long as they can – even if it seems increasingly unlikely that they would get elected again. Even still, that is not the basic problem. The basic problem is – and will always remain – Zionist colonialism in the Palestinian homeland and the apartheid character of the Israeli state. END_OF_DOCUMENT_TOKEN_TO_BE_REPLACED

The current bombardment of Gaza, together with the violent intrusion of Israel forces in that over-crowded region under ironic name “Defensive Edge” gives rise to stark questions as to  the justification for such an unequal form of combat  in which Palestinians civilians make up the majority of fatalities by a factor of 30 to 1 at the time of writing, when all but two of the 35 Israeli dead were members of the invading force caught in booby-trapped buildings during house-to-house raids in Hamas neighbourhoods. Deaths since the abortive cease-fire at the end of July have reflected the same unequal proportion on each side. 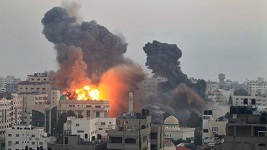 Meanwhile, President Obama and Prime Minister Cameron have both expressed concern about the civilian toll but have also declared themselves firm adherents of the Israel right to “defend itself” against attack from largely ineffective Hamas missiles.

Perhaps they are right. No missiles should be fired into Israeli by Palestinan “freedom fighters” unless they can tolerate reprisals, as they seem desperate enough to expect or compel the suffering population of Gaza to do. But that piece of political rectitude has to be qualified by several factors: firstly, the Palestinians of Gaza are living in virtual prison-camp conditions, and secondly the political question of the legitimacy of their captivity and, with it, the large-scale occupation of their traditional lands by their Zionist neighbours is – and will always remain – open to question. END_OF_DOCUMENT_TOKEN_TO_BE_REPLACED

People are asking why no American or European politician is prepared to condemn the Israeli state in its brutal dealings with the Palestinian people whose historical home it occupies today – still less to demand the creation of an independent state for the Palestinian people in a territory corresponding to a significant part of the land they occupied until quite modern times, and which now comprises the greater part the territory of the modern state of Israel – a relatively juvenile formation that celebrates its 66th birthday this year. 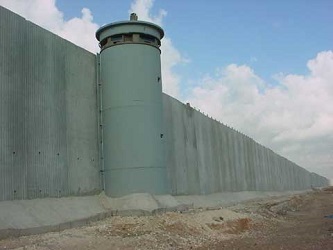 There must be a reason for this recalcitrance on the part of international politicians. That is to say, there must be a political explanation for it, since the ethical issues involved are fairly cut-and-dry.

Not alone does any geographically stable and ethnically distinct population obviously deserve to live in a country friendly to its culture and traditions  – or, at the very least, not overtly hostile to them – but the conduct of a war against them by the occupiers of their homeland in the name of ‘self-defence’ such as we are witnessing in Gaza today is practically indefensible in humanitarian  terms.

(In fact, the efficacy of the Israel Iron Dome anti-missile system means that its owners have extraordinary latitude in which to seek out a non-military solution to the underlying differences – differences which cast the extremism of Hamas and even Islamic Jihad in the light of an understandable reaction to intolerable oppression. )